Most people, who have never had contact with tattoos, when asked how they imagine a typical tattoo parlor or a tattooist, will describe a fat bloke with a cigarette sticking out of his mouth sticking a needle into a candle flame and dipping it into a pot of school ink.
That’s why I’ve started this project. I would like to portray artists as the people they really are; people like you and me. If they have tattoos and they would like to show them, they are welcome; if they do not have any then I want to photograph them too. If they look ordinary, I want to take their portrait. Not as the stereotypes – shouting at the lens rockers, not as Lords of Darkness with a grimace that pushes us away, reinforcing the stereotype, but as real people, the people they really are.
This is not a freak show. It is not to entertain the viewer. It is for us to see human nature, real faces and should help us to see those whose works are appreciated and desired, whose skills convince others to let them cover their skins in ink with works they will carry with them for the rest of their lives. Not many other artists can share that. So I think they deserve a whole project dedicated just to them. Here is mine: Real Faces of Tattoo. 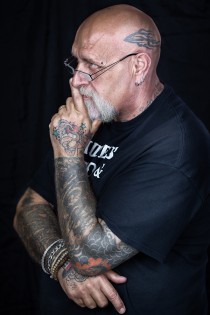 Gepetto from Lauren’s Tattoo said: “I love my work, meet all kinds of different people. Easy going and having a laugh.” George (Tank) Costache from Flamin’ 8 said: “Where the lake disappears in to the forest and the sky embraces the trees, where art and life combine… I’ll find that perfect being!” Naresh from Flamin’ 8 said: “I’m all out of pretentious sound bites and clichés” Araceli 4Ever from Prick Tattoo said: ”I’m a latina bitch who chews bubble gum n kickass… n’ I’m all out of bubblegum.”